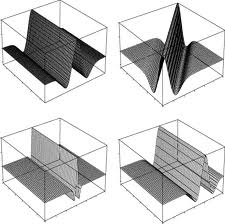 The pioneering work of researchers on signal processing paved the way to the powerful concept of multiresolution analysis. This is perhaps best known under the generic name of wavelets. Signals occur in the form of images, voice, radar, sonar, infrared etc. Different techniques have been developed over the years to understand these signals. Multiresolution provides us with tools to analyze these signals at different level of resolutions. It’s like looking at the same thing using a microscope with different magnifying powers. The formulation of multiresolution analysis moved the signal processing field away from classical Fourier analysis. But are wavelets equally efficient for all the shapes? Can we somehow take advantage of the shape of the object?

Where do wavelets fall short?

Despite the fact that wavelets have had a wide impact in image processing, they fail to efficiently represent objects with highly anisotropic elements such as lines or curvilinear structures like edges. Anisotropic elements are the ones that are elongated i.e. length is much greater than width. The reason wavelets cannot efficiently represent these objects is because they are non-geometrical and do not exploit the regularity of the edge curve. Wavelets assume that most things in an image have a full shape and that they are not particularly elongated in either direction. This works in most cases, but not all of them!
The ridgelet transforms were developed as an answer to the weakness of the wavelet transforms in sparsely representing what appears to be simple building blocks in an image, namely lines, curves and edges. Ridgelets take the form of basis elements which exhibit high directional sensitivity and are highly anisotropic. These very recent geometric image representations are built upon ideas of multiscale analysis and geometry.

The concept of multi-scale is broader than what classical multiresolution ideas imply. People developed new systems of representation which are very different from wavelet-like systems. These systems combine ideas of multi-scale analysis with ideas of geometric features and structures. This is where ridgelet transform comes into picture. Ridgelet system allows the representation of arbitrary bivariate functions by superpositions of elements. Wait a minute, arbitrary what? People like to use fancy terms to describe mathematical things because it’s easier for people within the community. Bivariate functions are those functions which vary in two dimensions. It means that the function depends on two variables and both the variables vary. Coming back to ridgelets, they occur at all scales, locations, and orientations.

Wavelets are used to do local analysis of a signal. Wavelet analysis tells us about the contents of the signal and also the location within the signal. Unlike wavelets, ridgelets are non-local as they are infinitely elongated in the co-direction. In the context of image processing, where one would restrict objects to reside on the unit square, ridgelet functions are roughly of unit length and have arbitrary width. This means that one would have all possible aspect ratios. This is like an addition to the features provided by a wavelet transform. We artificially stretch a signal to see if we can find something interesting. This is a simplified explanation of the ridgelet transform. The actual mathematical formulation is quite complex. If you are interested, you should definitely give it a read!