Most of the people in the tech field have already heard about Fourier analysis by now. Some of them love it, some of them hate it and the remaining few are just not sure what it is! Fourier analysis is one of the most fundamental tools in the field of engineering and technology. In fact, it is as fundamental as addition or multiplication. It is heavily used in signal processing, physics, speech analysis, image processing, cryptography and many more fields. Whenever people try to read and understand it, they are always hindered by all the mathematical equations. The actual explanation is drowned somewhere. Let’s see if we can fix that here.

Fourier analysis takes a signal and decomposes it into simpler pieces. It’s like you are given a big number and you don’t understand it. So you express it as a sum of smaller numbers. It’s not exactly like that, but let’s say it is for now. In real life, we get complex signals like speech, image, sonar waves etc. We cannot just look at them and understand what’s inside them. So we need a tool which can decompose those signals so that humans can understand what those signals contain. 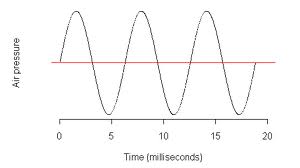 In Fourier analysis, the sine wave is like the fundamental signal. The figure to the left represents a sine wave. Every signal can be expressed as a sum of many sine waves of different amplitudes and phases. Ok now what does that mean? It’s like how we can express any number as a weighted combination of 1 and 2. Consider 17 for example. It can be written as 17 = 7*1 + 5*2. Here 7 and 5 correspond to ‘amplitudes’. I will talk about phase later. There are other ways to express the number (1*1 + 8*2), but in Fourier analysis, there is only one way to decompose a signal. The numbers example is too simple to explain the complexity of Fourier analysis in its entirety, but it captures the gist of what I’m trying to say here.

Where do we use it in real life?

Let’s see how Fourier analysis is used in real life. We have all used music software one time or the other. We have seen those bars which do “equalization”. What exactly is that? An audio signal consists of different frequencies. Different singers, instruments, background etc combine together to form a musical piece. Now some frequencies tend to be dominant and some are not so dominant. We don’t want such inequalities. Fourier analysis decomposes the audio signal into different frequencies. We can then change those “amplitude” values and then reconstruct the audio signal using these new values. In our example, if we don’t want any ‘2’s, then instead of 7*1 + 5*2, we can do 7*1 + 0*2. This way we are suppressing all the ‘2’ components. If we reconstruct the number based on these new amplitudes, we get ‘7’. If you do this in audio, you will get an output which will not contain that particular frequency.

We are basically taking a time domain signal and transforming it into frequency domain. Time domain signal refers to a signal expressed in time scale where we can see what the value is at any given point of time. Frequency domain signal refers to the signal being expressed in the frequency scale where we can see all possible frequencies contained in the signal. When we consider image analysis, Fourier analysis can used to remove high frequency components, image compression, remove artifacts etc.

Remember we talked about phase earlier? It’s kinda difficult to understand the concept of phase unless you have dealt with signals and systems. Let me see if I can explain it here. If you consider the numbers example, phase refers to the amount of negativity. For example, we have 3 and -3. These are opposite numbers. If you add them, you will get 0. This is an example of two things being completely out of phase. In signals, we have control over the amount of negativity. We can place two signals in such a way that when you add them, they will cancel each other out. But, we can also place them in such a way that one signal will partially hinder the other one. This particular thing is useful when we want to produce a wave which lies somewhere in between the two given waves. Using 3 and -3, we cannot produce -1 or 2. In signals, we can do this by creating phase difference between the signals. This is critical because we cannot always just directly add two waves and get the third one.