Fingerprint recognition was one of the first forms of biometric authentication techniques developed. Biometric authentication refers to the process of identifying humans by their natural traits. This can include fingerprints, face, voice, iris etc. When you want machines to authenticate a particular person, you choose a feature of that person which he cannot control. Fingerprints are still widely used in criminal investigations and in certain other domains where security is required. Have you ever wondered if fingerprints are distinct enough to be used to identify a person? How do they match fingerprints? 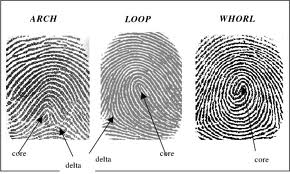 If you carefully look at fingerprint images, you will see that a fingerprint is a pattern of interleaved ridges and valleys. Ridges are the curvy lines and the valleys are the spaces in between those lines. If you analyze these ridges, you will find out that there are three general patterns: arch, loop and whorl. An arch is a line that starts from one side and ends on the other. A loop starts from one side, takes a U-turn and comes back to the same side. A whorl is a circular pattern around the center of the fingerprint. The center point of these patterns is called the core. It is not exactly the geometric center point of the fingerprint image. It actually corresponds to the landmark point in a fingerprint. If there is whorl, then the core is the center point of the circular pattern. If there is a loop, then the core is topmost point of the loop pattern. All fingerprints are combinations of these three general patterns. If you look at the fingerprint images, you will see that there are a lot of lines. You can form billions of fingerprints using these three basic patterns. There are around 7 billion people on this planet and all of them have different fingerprints. In fact, there are enough number of distinct patterns to support another trillion people. This was the reason fingerprint was chosen as a form of identification.

How do they capture fingerprints? Is it just like taking a picture?

Optical sensors capture the images directly. It’s just like a specialized digital camera. The disadvantage is that it doesn’t detect if there is actually a human present there. You can keep an image of a finger and fool the system. It is also susceptible to unclean fingers. If your finger is marked with something, then the captured image will be of bad quality. This will lead to wrong matches. Ultrasonic sensors make use of high frequency sound waves to create visual images. This doesn’t require clean fingers. The waves penetrate the epidermal layer and the reflected waves are used to form the image.

What features do they use to match fingerprints?

Each fingerprint usually has a loop or whorl singularity and the pattern matching algorithms aim to find this point. Once the point is found, they align the images and then match them using simple techniques. The critical thing is to find this point accurately. As we discussed earlier, this point is called the core. These kind of algorithms would heavily rely on finding the core accurately. If it’s not found or if it’s wrongly found, then there will be a mismatch. Other techniques use minutia to determine a match. Minutia refers to the various ways in which ridges can be discontinuous. There is actually a lot of information in these discontinuities.

The main distinction between different fingerprints is the orientation and compactness of the lines. We need a tool to extract and quantify this information. Gabor filters are ideal for this kind of situation. These filters are both frequency-selective and orientation-selective. Hence we will get an idea about the distribution of frequency and orientation information. A lot of other techniques have been proposed as well. Most of them focus on minutia extraction using different techniques.

How do they actually match the fingerprints?

Once the features have been extracted, the fingerprints are matched to the ones in the database. Correlation-based methods simply superimpose the two images and the correlation between corresponding pixels is found out for different alignments. This method is not very robust. Minutia-based matching methods use minutia extracted from the two images and tries to find the maximum number of minutia pairings. Ridge-based matching methods use the features extracted from the ridge patterns. These techniques are advanced and usually yield good results.

Fingerprints were not only chosen because of the uniqueness, but also because of the simplicity and compactness. It is easy to capture and store the data. You don’t need expensive equipment to analyze the data and you don’t need a lot of space to store it either. This works out perfectly when you want to look through a database containing millions of entries.